The Greatest Ticket I Never Used…

I’ve been blessed to be able to go to San Francisco Giants games since I was just a year or two old. However, today as I type this, the greatest ticket I have ever purchased is one that, from the bottom of my heart, thankfully I didn’t have to use.

When the Giants moved to San Francisco in 1958, my family instantly became fans. My grandparents have attended games for nearly every season since that year up until a few years ago when the task of getting there became more strenuous than their physical beings could handle. They passed along a legacy to my uncles and my dad that many San Francisco Giants fans, and fans of sports in general, can appreciate. However, the depth of passion for San Francisco Giants baseball in my family is deeper than I could ever explain fully.

To this day, it’s up for debate as to what my first words were. I’m sure my Mom would still say I said Toyota first but I’m sure others in the family would contest it was “Go Gi Gi’s!”

In fact, my earliest memory as a child and one of the most vivid in my mind to this day is when I was about 2-3 years old, at my grandparent’s house. I was playing “baseball” with my dad and uncle, using a wrapping paper tube as a bat and a balloon as the ball (presumably because Grandma said I couldn’t play with the real ball in the house). I was mesmerized by the way the balloon spun towards me when my dad would hit the bottom of it near the tied knot and it would spin quickly towards me. How I remember it, I don’t know but I remember I was wearing a Giants uniform.

Although we never had season tickets, or even made it to more than a handful of games in a single season, the games my family made it to were luckily, some of the most important in Giants history. My Grandparents, Dad and uncles were at the infamous game that Juan Marichal hit John Roseboro with his baseball bat in 1965. Throughout the 1980s we could be seen at Candlestick regularly, I was probably eating a hot dog covered in Gulden’s Spicy Brown mustard in one hand, with my glove on the left hand, waiting for that foul ball that never quite made it into the upper decks of Candlestick. My Grandma sitting by my side would be wearing possibly the greatest single piece of fashion history ever created, the “I Hate the Dodgers” visor. We’d all have on t-shirts, proudly proclaiming that we were there, at some point along the way, cheering for the team win or lose.

My Dad was at Candlestick Park in 1989 for the NLCS Series against the Cubs and although I lived in Oregon at the time, the 1989 World Series was one of the most memorable moments in my life. My Grandparents were at the park waiting for the game to begin when the 1989 earthquake hit, and without a way to contact them, it made for some heart-wrenching time as we waited and watched in horror as the events of that night unfolded. Thankfully, my grandparents made it home with nothing more than some raised adrenaline levels and memories of the fires they drove past on the way. My Grandma still has the bolts to the seats in Section 53 that shook loose from the earthquake. 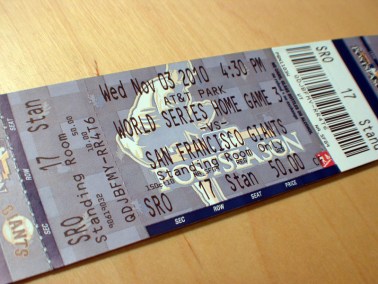 A couple of years later while living in Oregon, I was blessed to have former Major League All-Star pitcher and former Giant Bob Knepper as my little league coach. I became friends with his son Jacob and spent time with Kneppers during those years but one thing will forever be cemented in that era for me. While visiting with the Kneppers one day, they got a call and it immediately went from lighthearted fun to a solemn silence that was deafening. On the line was Dave Dravecky and his wife Jan, they had called to let Bob and the family know that Dave had decided that amputating his arm was the only option left in beating the cancer that had taken him out of the game months before. We prayed together on the phone, and although I haven’t stayed in touch with the Kneppers over the years, I will never forget them and will forever be grateful to them for their love and encouragement. Putting the final emphasis on this stage of my life, I was able to make it to Candlestick Park with my family in 1991 for “Dave Dravecky Day,” the tribute to the retired pitcher. It was the first time I remember crying at the ballpark but it surely wouldn’t be the last.

The stories go on and on. Mother’s Cookies trading cards…”My Pal” Chili Davis’ autograph…Spring Training in 1993 where I got Will Clark’s autograph along with Bob Uecker. Yes, that Bob Uecker. If you went to high school with me, you probably remember nacho cheese on my Nikes. I refused to clean it off from Spring Training where I nearly caught a foul ball…just two people away but it was worth sacrificing the nachos, and the shoes.

In 1999, we all made it out for the last series against the hated Dodgers at Candlestick Park, when the Giants ceremoniously defeated the Dodgers. That day, home plate from Candlestick Park was dug out of the ground and flown over and placed in its new home at Pacific Bell Park. In 2002, well actually we won’t talk about that quite yet.

In 2007 on August 7th, three days after my birthday, I was there at AT&T Park when Barry Bonds hit the record breaking number 756 with tears running down my cheeks once again.

Along the way, and along with all the stories I am leaving out, I’ve picked up countless pieces of San Francisco Giants memorabilia. Baseball cards of Kruk and Kuip, hats from the past, “I Was There” t-shirts from past memorable events, and even the rally rags from going to the early home games with some of the best friends a person could ever have in this postseason will be forever cherished.

However, as I sit here typing this with tears in my eyes, the tickets I had to Game 6 of the 2010 World Series have instantly become the greatest treasure in my collection.

A symbol of accomplishment for a team, for The City, and for a region that has cheered for multiple generations through the hard times of seeing our legends fade from glory, and through the excitement of young players becoming stars and developing into our next hope.

The joy in knowing that my grandparents, fans for all of the 52 years that the Giants have been in San Francisco, got to see them finally get over that last hurdle. The joy in knowing that my Dad, like me, has cheered his entire lifetime for these Giants to get over that same hurdle and bring a World Series title home got to see them finally emerge victoriously.

These tickets will carry that love and passion.  The passion that I was so privileged to learn from my parents and grandparents that win or lose, we are forever San Francisco Giants fans. And someday these tickets to a game that never happened will be passed on to the next generation to show that even if it never happens again, that in this moment history chose us to be the World Champions.