Allen Iverson – True To The Game 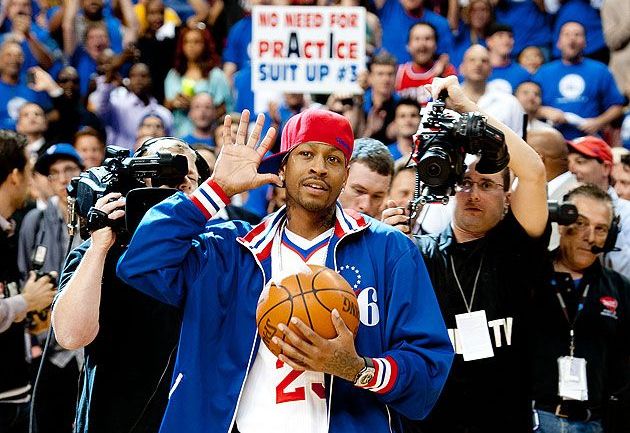 Originally written for Nice Kicks in 2015.

Allen Iverson is 40 years old. For better or worse, he’s never changed. Neither has how polarizing he is. You either love Allen Iverson, or you hate him. It’s rare that you find any basketball fans with feelings in between. Even now, years after he last played professional basketball in any regard, he is a talking point on a regular basis. What is it about AI that makes him relevant to the media and to sneaker consumers?

Allen Iverson never won an NBA Championship, so compared to Michael Jordan and Kobe Bryant, he doesn’t stack up from a historically accomplished sense. LeBron, KD, DRose and the current roster of the NBA’s best players still routinely have the attention of beat writers and Twitter commentators to keep them relevant. Iverson’s 11 All-Star Game appearances and Most Valuable Player award line up nicely with another former superstar, Charles Barkley. However, even with Sir Charles’ TV time in front of the masses as a weekly analyst on TNT’s Inside the NBA, Barkley doesn’t keep the attention of haters the way Allen Iverson does.

Most of the world is fed by societal norms and raised to fit into those predetermined expectations. If you follow the rules and go with the status quo, you can become successful, so long as you are comfortable with always having someone else one step above you. The more you defy that, the more you’re outcasted and the more “the man” stacks the deck against you.

This is true for athletes and entertainers especially, but also for the rest of the world. As his former coach Larry Brown once said, “Allen Iverson could have been the most popular athlete the NBA has ever had.”

Thankfully, for myself and his true fans, Allen Iverson never fit into the mold.

Iverson was blessed with the athletic skill and heart of half a dozen men, compacted into a 6 foot, 165-pound frame. His physical abilities, whether with a football or a basketball, were nearly unbelievable, and by the time he was pointed out as the scapegoat for Hampton, Virginia’s long-running racial tension, the world had seen him. They saw the passion and intensity he played with.

Iverson came along at the perfect time to be a hero and the perfect time to be a villain. In the mid-1990s, ESPN began to become mainstream. Which meant the average high school kid in urban American cities could get their first glimpse into athletes across the country in a way that wasn’t really possible before. That view also gave us a look into the struggle that AI had to go through, including the infamous bowling alley incident.

Iverson was wearing black and white Nike Air Maestros the first time I saw him on TV. He caught an alley-oop and threw it down two-handed. At the time, I was about the same size and in high school like AI, and could barely get down a single-handed dunk. From then on, I began following Iverson. If you didn’t know him then, when he landed at Georgetown and wore shoes like the Nike Air Way Up and the Concord Air Jordan 11, you had to take notice, because the media began paying attention, too.

After being the number one overall pick in the 1996 NBA Draft by the 76ers, the wait for his signature sneaker began. When the Reebok Question came out that fall, it was like you had to choose between Jordan and Iverson. That made The Crossover an even more important moment than most people understand. But the choice to wear Iversons meant something more because Iverson represented something more. 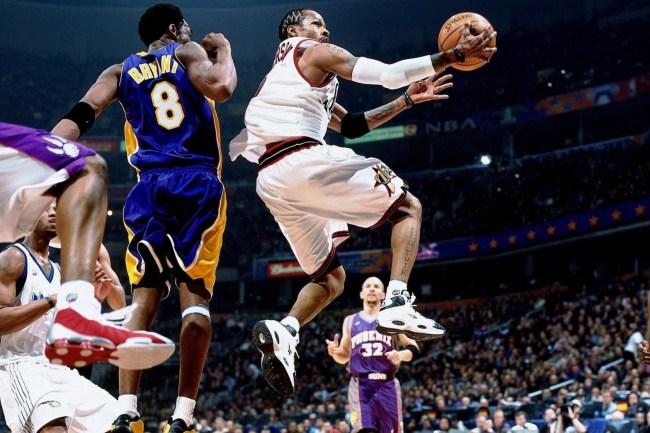 Allen Iverson in the Reebok Question for the 2001 NBA All-Star Game (photo via NBA.com)

The Question was the first time basketball sneakers represented the new era of hip hop because Allen Iverson represented hip hop in everything that he did. The way he played, the way he dressed, the way he talked — it was different than the rest of the NBA and he was a threat to the league’s status quo.

While stars like Michael Jordan were dealing with a gambling problem, and Charles Barkley was often drinking, Allen Iverson was not only a problem, but he became the solution to the NBA’s problems. AI had cornrows, tattoos, baggy clothes and the “keep it real” attitude that made him easy for David Stern and the NBA to use as a distraction to brush other player’s problems under the rug. Iverson had his issues, there is no denying that, but there was never a time that he made excuses, or felt the need to be anyone other than himself, which only solidified his tremendously dedicated fan base.

The uncompromising nature of Allen Iverson only became more appealing because he continued to find success in the league. With scoring titles, all-star appearances and a league MVP, his footwear became as important to the game as anyone else’s. In fact, you could argue, his first ten signature sneakers rival any other player’s first ten shoes from a signature line. Not to mention, he has one of the longest-running signature sneaker lines as it is.

Iverson’s sneakers will undoubtedly hold the test of time. After all, they have for nearly twenty years thanks to the dedication of his fans who stick by him, buying his shoes and wearing his Reebok gear, because he wears his heart on his sleeve. If Allen Iverson was on the court, he was willing to sacrifice it all, diving into the crowd for a loose ball at any given moment. It’s rare to find a player like that even today, especially one that has the talent and superstar status that AI had.

The Answer may get unfairly targeted by the media, but even he would tell you, it’s nothing he can’t handle. Allen being Allen will always upset the people in this world that never had the courage to be themselves, and it’ll also be the primary reason his fans love him like a brother. Rest assured, good or bad, Allen Iverson will continue to be the show everyone wants to see, just like he has for his first 40 years. Because, as he says, “I can’t be the Allen Iverson that you want me to be. Only Allen Iverson I can be is the Allen Iverson that I am. And if you love that, then cool. And if you don’t, shit, fuck it.”

For pics of part of my Allen Iverson collection, check out #40DaysofIverson