Sneaker advertisements are one of my favorite things because it’s the combination of sneakers and great storytelling in its purest form. Even before Twitter imposed 140 character limits on our lives, the challenge of getting your message across in a concise and comprehensive way was the goal for advertising and marketing professionals trying to grab someone’s attention through a print ad. Over time, commercials have become more powerful, the design has become more capable, and marketing has become more about entertainment but some elements of advertising and marketing still stand the test of time.

This Converse Chuck Taylor All-Star advertisement is from 1968 prior to the Mexico Olympics that Tommie Smith and John Carlos made their famous medal ceremony stand. It’s one of those ads that can stand the test of time for a couple of reasons. 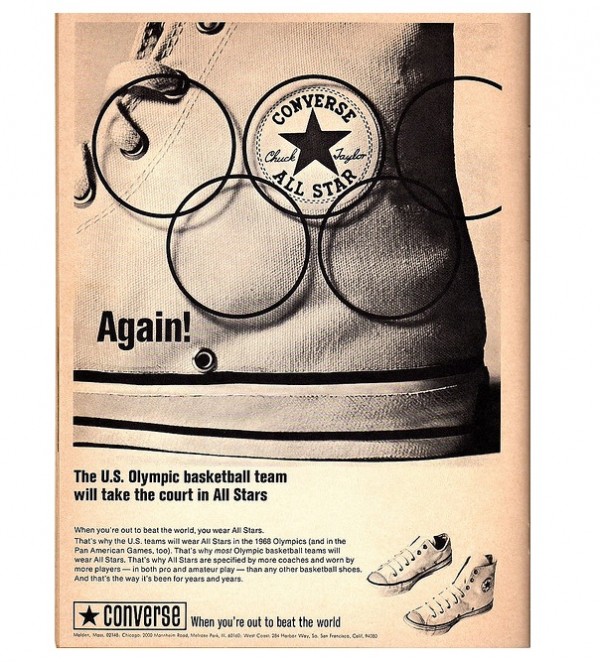 First, this Converse ad captures emotion everyone can relate too. As the 2014 Winter Olympics get closer, we as people, begin to take pride in our countries, and for those two weeks of competition, we’re all as American as apple pie and cheering on our fellow countrymen as they represent us in their Red, White, and Blue. Until the Olympics no longer exist, this emotion will always be relevant because even between the two-year Olympic cycles, we’re all out to beat the world in some way or another.

Second, the imagery is instantly recognizable. Whether you’re a sneakerhead, collector, afraid of being labeled either of the prior, a teenager, a mid-life crisiser (I made that up but I’m not apologing), or a retiree and this is your 50th Olympic Games experience, the Olympic Rings are iconic and easily interpreted even without their colors.

Modern-day advertisements for sneakers have become so focused on the niche market the shoe is designed for that they’ve lost the widespread appeal this sneaker ad has. Today’s consumer cares more about supporting a brand than a country and a superstar over a team. Chucks might not be made in the USA like they were back then but the Converse name and the All-Star itself represent Americana and a sense of pride that has been almost completely diluted over time. Looking back at an advertisement like this strips out the bells and whistles, celebrity endorsement, 1231230123 frame-per-second all hopped up on Mountain Dew Youtube video approach and gives a true sense of the basics, of what works, whether it’s 1968 in Mexico City or 2014 in Sochi.