Congrats to Tyreke Evans on Rookie of the Year! 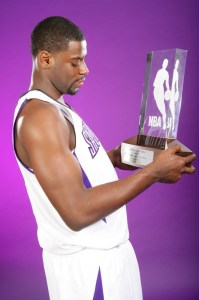 Being a Kings fan, I’ve been talking up Tyreke Evans for a while. Don’t get me wrong, I was, like many Sacramento fans hoping to return to the Jason Williams Sacramento Kings days with Ricky Rubio running the point. It only took a trip to Arco Arena for a preseason game to change my perspective on the Kings’ 2009 draft choice.

Early in the season it was apparent that Tyreke Evans was more than just the Rookie of the Year. Being from Sacramento, knowing the fans, being a fan, it was easy to see that ‘Reke was more like the city’s Most Valuable Player. The economy has Sacramento in a stronghold. Tyreke brought some light to an otherwise dark outlook.

Today, my prediction that Tyreke Evans would become Rookie of the Year finally becomes true.  If this doesn’t fuel some much needed fire to get a new stadium built in Sacramento, I don’t know what will. Tyreke deserves it, the fans of Sacramento do, and so does the economy of Sacramento.

Congrats to Tyreke and the Kings on a bright future!

Justification for the award is below…