Ok, maybe not yet. He will though.

The Kings might not have the best record, but they definitely have found the excitement, that has been lacking in Sactown for years. Wednesday night, the fans at Arco Arena, although it wasn’t a packed house (Raptors are apparently not a crowd drawing team here), the fans were ready to show their support of the team, and more specifically for Tyreke Evans.

I’ve already said that Tyreke is more MVP candidate than ROY candidate, due to what he does for not only the excitement of all of his teammates, but for what he brings to the organization and the city of Sacramento. In a city of post-apocalyptic cyborg assassins politicians and a struggling downtown economy eager for a new stadium, Tyreke brings an excitement that has even fair-weather fans with their eyes glued to the 23-45 team like Robert Goulet in a staring contest. The fans were equipped with “Rally for ‘Reke ROY” shirts and Tyreke’s head on a stick and chanting R-O-Y the entire night for Wednesday’s game. Tyreke did not disappoint. Rising to the special occasion, he notched his first career triple-double with 19 points, 10 boards, and 10 assists.

Maybe Tyreke receiving Rookie of the Year honors when the time comes, will be enough for the city and the Kings to find a middle ground and get the new stadium built. We need it, and if Tyreke stays in Sacramento, then he is going to need a bigger and brighter stage to entertain the relentless and dedicated fans that make up this “cow town.”

Thanks to Mr. Nojima for hooking me up with a ticket to “Reke ROY Night.” 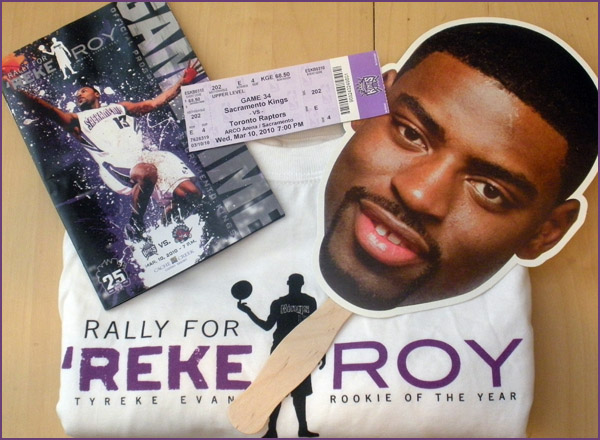