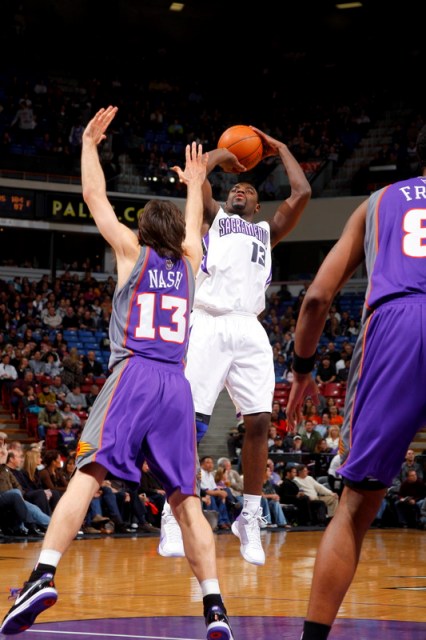 Seeing that title, you’re either thinking I’m crazy, or you completely understand the thought because you’re obviously a Kings fan. Rookie of the year seems like an obvious to me. Yeah, Brandon Jennings has been playing incredible for the Bucks, but I don’t know if he’s brought to Milwaukee, what Tyreke Evans has brought to Sacramento. If you look at the numbers, Tyreke edges out Jennings in per game stats in points, rebounds, steals and blocks. I think Rookie of the Year is a sure thing, and MVP isn’t a far stretch.

The NBA has misconstrued the term Most Valuable Player for years. Just like the All-Star game, it’s more of a popularity contest than it is a representation of who is playing well in the league, or in the case of the MVP, what the individual player means to his organization. A perfect example of this is Tracy McGrady, at one point he was an All-Star, but how can someone who spends a majority of the time on injured reserved list be an All-Star?

Obviously, as a life long Kings fan I am proudly biased but that also gives me a better opportunity to see Tyreke and the Kings more than most. What he brings to the organization on a completely different level. Tyreke puts fans in the seats at Arco Arena. The excitement he brings for basketball to Sacramento is not only in the stands, but in the city people are talking about the Kings again. How important this is to a city that seems to be struggling as much as Sacramento is economically is indescribable. Taking on the Suns and Steve Nash tonight, Tyreke and the Kings fell just short but once again Evans pushed his campaign for the MVP, with 27 points, 11 rebounds and 7 assists.

The Kings and their fans may be losing close games right now, which means Tyreke Evans won’t receive any consideration for the Most Valuable Player. However, when the team figures out how to win these nail-biters, the thoughts of those that aren’t Kings fans will shift from Rookie of the Year to MVP, like the chants heard at Arco Arena tonight as Evans knocked down two free throws at the end of the game. It’s going to happen sooner than most expect.