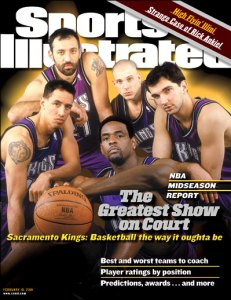 Being a Kings fan since they moved to Sacramento in 1985 (yes, back when they played in what is now a small office complex) has been a roller coaster ride to say the least. While heading down hill on the roller coaster may be a lot more fun then the slow climb upwards, it’s not the same for a basketball fan. The Kings down slide has been steady, and heart wrenching since 2001, finally hitting rock bottom last year with the worst record in the league. On top of that, a little salt in the wound was applied by missing out on the number one draft pick, which we had the best (1 in 4) shot at winning. I’ll be the first to admit I was disappointed to say the least, as visions of Rubio dishes danced in my head. Nevertheless, seeing that Geoff Petrie has taken more control of the personnel on the team in recent months, renewed hope in the off-season moves, more hope than I’ve had in 7 or 8 years.

The highlight as a fan for me came with Jason Williams running the show, albeit wildly sometimes, run n’ gun, it was and is my favorite style of basketball to watch. I couldn’t help but feel a little reminiscent of “White Chocolate” over the past month or so, due to his return to the NBA. The combination of he and Vince Carter on the Magic is one of the greatest highlight reel duos in the history of the NBA…if it had happened in 1999. Back when Vince Carter was rocking the Tai Chi from And 1, and J-Will was, aside from appearing on AND 1 Mixtapes, inventing some new no-look pass, that no one had ever seen, during every game. Yeah Williams may have taken some ill-advised shots, and committed a few turnovers, but what do you remember more, a basic bounce pass, or no look dish by your favorite player? I thought so.

Aside from J-Will being traded for Bibby (don’t get me started on Bibby, Miller, or Artest), those were the best days as a Kings fan. In fact, I was lucky enough to be at THE high point in Sacramento Kings basketball, the 2002 Game 5 Western Conference Finals against the Lakers in Sacramento. Series tied 2-2, and never have I been to a louder indoor sporting event in my life, and I’ve been blessed to attend quite a few (it ranks up there with being there for Barry Bonds 756th home run). The crowd was going crazy an hour before game time, culminating with the burning of a Lakers jersey in the middle of the court as the team was being introduced. (The league banned this part of the “warm-up” ritual shortly after.) My voice was gone by the end of the 1st quarter, and my throat hurt for another couple days after the Kings won that game to go up 3-2. Unfortunately, the Kings, although possibly due to some biased officiating, lost the next two games. They haven’t made it back to that excitement level since. Fast forward to 2009…and back comes Jason Williams…

Well, maybe Jason Williams isn’t in Sacramento, but after watching the first couple of games this season, the excitement level has returned for the Kings and their fans for the first time in a number of years. Omri Casspi, Tyreke, and Brockman are all hustle all the time, which is the same reason a lot of basketball fans would rather watch March Madness then NBA games. The combination is reminiscent of the late 90’s/early 2000’s when our team was hungry to win, something that didn’t occur with the likes of Brad Miller and Ron Artest. While it took Kevin Martin dropping nearly 50 points to get the Kings their first victory of the season, that won’t be the case much longer. The second part of the winning equation that is equally important, is having fun. If you watched the first home game earlier this week, you saw it. Smiles on the faces of not only the players, but even Coach Westphal had a smile on his face after Nocioni knocked down a three pointer as Westphal screamed for him to use some clock.

The team is hustling, they are having fun, and the crowd was 110% into the game. It may not be 2002 again, but it’s a lot better than we’ve seen in Sacramento for a number of years. The best part…the team is the third youngest in the league. We are only going to get better. It may be a slow ride to the top of the hill on the roller coaster, but on the court, momentum is dictated by the fans, and nobody knows how to take their team to the top like Sacramento Kings fans do!

Reminisce with me… and let’s hope the new Kings team can have their own SI cover by years end. (And selfishly I’d like to see Jason William and Vince Carter rock the Tai Chi by seasons end too.)