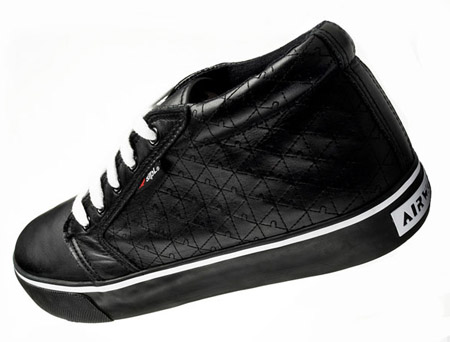 If Drake has enough buzz to sell blank discs, then the sneaker equivalent has to be Jeff Staple selling Airwalks. The fruits of labor from the partnership of Staple Design and Airwalk, which has had the sneaker community buzzing for a number of months now, has finally ripened. The double-labeled Jeff Staple Airwalk kicks have started to arrive at Payless Shoe Stores, is anyone lined up?

As someone who grew up in the era that saw the pinnacle of Airwalk’s popularity, I would be lying if I said I wasn’t excited to see someone like Jeff lend a hand to the struggling footwear company. Aside from those feelings, I admire Staple for stepping outside the cultural glass box that seems to restrain the creativity of so many people in the streetwear and sneaker industries. I’ve never had any doubts in his abilities to succeed in this partnership. I can also completely understand why Airwalk was the perfect fit, the challenge.

It makes perfect sense, Jeff, like most of us in the age group, was most likely a fan of Airwalk’s growing up. So first off, there is a personal connection. Secondly, when you have accomplished what Jeff has in this industry, sticking with the norm becomes tiring, to say the least. Not that there is anything wrong with sticking with what works, but there is a lack of gratification when it comes to repetition. The challenge of making Airwalk into a successful brand again, regardless of whether it is sold in Payless stores, or the highest of high-end boutiques, would be equivalent to climbing Mt. Everest in those very Airwalk shoes.

With the shoes releasing at a price point of $50 and under, Jeff accomplishes two things. He makes them attainable to the masses, which is essential in an economy like this. In addition, the price point is right at that spot where, if the quality is up to par, sneakerheads will likely consider it an option. It’s not too cheap, i.e. Starbury’s and Protege, yet it’s not at the typical Staple Design hype prices. Add to these points, the marketing power of Staple to have Airwalks in the USA Today with prime placement, the buzz created by Jeff merely announcing the partnership, and success is imminent.

Daps to Jeff for going against the grain, and to others immersed in the culture, a simple reminder. If you allow the cultural glass box to exist, it will inevitably suffocate you.